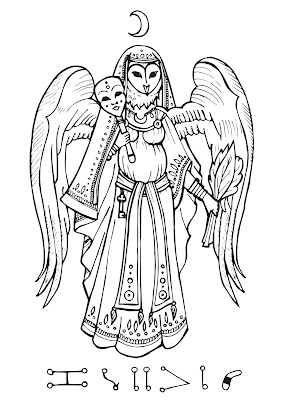 FIrst image posted is this original design by myself. The images of the moon traditionally found in texts such as Agrippa and The Picatrix are incredibly complicated (usually involving multiple snakes wrapped around multiple limbs) and i will attempt to work on them at some point - however for now, i'm pretty pleased with this image of my own creation.

This was one of the first of a set of personal images i came up with for my own use, combining various elements of luna attributes to make this design. The mask is indicative of secrecy and illusion, the plants could be healing herbs, or the leaves (the part of the plant ruled by the moon) of a number of healing herbs. She wears a mantilla/habit like cloth over her head akin to various religious women as well as the high priestess in the Tarot. Her stomach is swollen with pregnancy, and finally her face is that of an owl, which to me, is one of the most overtly lunar animals.

would love to know if people have any thoughts.

Email ThisBlogThis!Share to TwitterShare to FacebookShare to Pinterest
Labels: own design